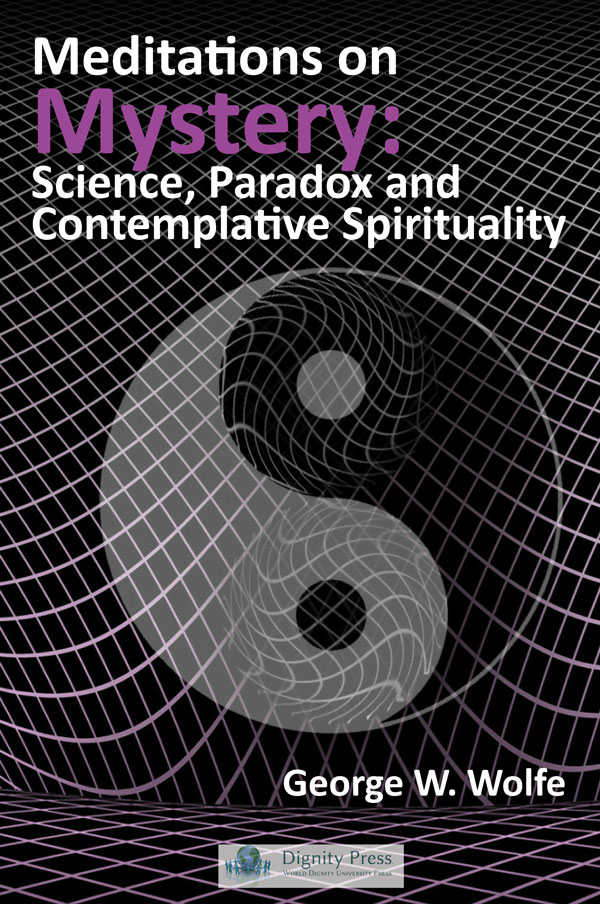 Excerpt from the preface

A primary difference between the scientist and the spiritual contemplative is that the contemplative can accept paradox and uncertainty as being in the nature of things. Paradoxes are to be embraced as a means of thinking more profoundly and deepening the conversation. The rational scientist, on the other hand, is only content when paradoxes are explained and mysteries solved. Indeed, there is a part of us that feels uncomfortable with uncertainty and wants to know all the answers. But the deeper we dig into the physical universe, the more questions present themselves and the more we are confronted with mystery.

In the process of “rewiring” my own “neural networks,” I have looked at paradox and mystery by examining scripture, modern science (as opposed to classical Newtonian science) and the writings of religious mystics whose insights are remarkably compatible with reality as revealed by quantum mechanics, holography, and astrophysics. Understanding this compatibility brings about a reconciliation between modern science, contemplative spirituality and religious myth. In this reconciliation, a new awakening takes place whereby the conflict between reason and faith, and between subjectivity and objectivity, falls away.

Albert Einstein’s maxim, “Science without religion is lame; religion without science is blind,” takes on new meaning. Without the insights and empathetic values that come to us through spirituality, science is reduced to a cold and dehumanizing worldview.

It is my hope that all who read these pages will be left with a deeper appreciation of the emerging intersection of modern science and spirituality.

"Meditations on Mystery" can be ordered directly from Dignity Press.

Clicking this button leads you to a paypal page, where you can buy using paypal or your credit card. Alternatively, you can order at many offline and online bookshops, e.g. Barnes&Noble and Amazon.

George Wolfe is Professor Emeritus at Ball State University where he served as director of the Center for Peace and Conflict Studies from 2002 to 2006, and Coordinator of Outreach Programs from 2007 to 2014. He is a certified mediator and was trained to conduct interfaith dialogue at All-Faiths Seminary International in New York City where he was ordained an interfaith minister. In 1991, he was awarded an open fellowship from the Eli Lilly Endowment which made possible his first trip to India where he became interested in the nonviolent philosophy of Mahatma Gandhi.

Wolfe received his doctorate in higher education administration from Indiana University. As an educator, he has lectured both within and outside the United States on topics related to nonviolence, peace education, academic freedom, and the role of the arts in social activism. He has been a featured speaker in the Hall of Philosophy at Chautauqua Institution and has served as a panelist at the annual International Conference on World Affairs in Boulder, Colorado. He has also served on the advisory council of the Toda Institute for Peace, Policy and Global Research, and served as a visiting scholar at Limburg Catholic University in Hasselt, Belgium. In the spring of 2007, he presented peace education workshops in the island nation of Saint Lucia by invitation of the Ministry of Education.

Dr. Wolfe is also a classical saxophonist who held the rank of Professor of Music Performance at Ball State University. He has appeared as a soloist with such ensembles as the Royal Band of the Belgian Air Force, Chautauqua Motet Choir, the U.S. Navy Band Brass Quintet, the Indianapolis Children’s Choir and the Saskatoon Symphony. He has also given recitals and master classes throughout the United States, as well as at major conservatories and universities in Europe, Central America, and the Far East.

The world does not need one more religious warrior killing in the name of God. What the world needs are more religious pilgrims ready to plunge into the mystery of God’s Oneness. This plunge is not for the faint of heart, but for the brave who can postpone quick certainty for an adventure into the vast complexities of the Divine and who are content to dwell in their innermost being. George Wolfe’s Meditations on Mystery: Science, Paradox and Contemplative Spirituality is both a guide and a compass for that journey.

Professor Wolfe makes a strong case for an intensely personal spirituality that allows one to explore the unknown (and perhaps unknowable) aspects of human experience without rejecting the scientific enterprise. Placing our human search for meaning in a historical context, his book provides valuable insights on how that historical search can inform the way we confront the many unknowns remaining in our modern world. It is an important counter-balance to the fundamentalism (both religious and secular) that would tell us it has succeeded at replacing mystery with certainty.

George Wolfe brings together the mysteries of science & religion with the mystery that unfolds in the meditative practice. A must read for those in search of their faith, and those who want to live their faith through acts of peace and justice.

George Wolfe presents a fascinating account of how religion and modern science are converging to probe the mystery we call the universe. I was mesmerized by Dr. Wolfe’s story that includes connections with Einstein’s Theory of Relativity, the Big Bang Theory, Möbius strip and many paradoxes, in addition to his personal spiritual experiences with the great religions of the world.
Jay Bagga, Ph.D.
Professor of Computer Science
Ball State University