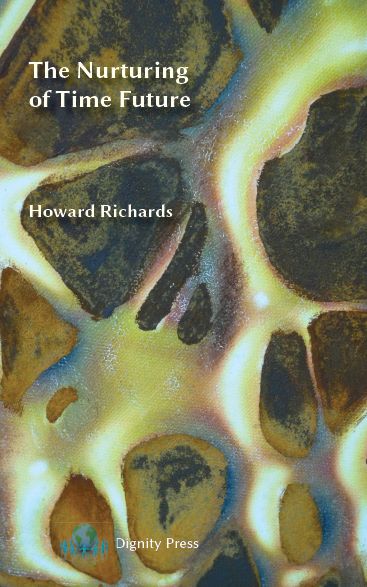 “I have decided to write a short book about everything, addressed to educated people of good will who see the need for paradigmatic change. Its method will be to say what I feel needs to be said and to do my best to explain the reasons and motives that make me feel I need to say it. I will propose a philosophy in the old-fashioned sense of articulating a synthesis of the social and natural sciences that provides an overall framework for deciding what to do.”

Howard Richards enjoyed a double career in the United States as a college professor and as a practicing attorney-at-law. Now he lives in Chile.
In this book, he simultaneously contributes to belles lettres, to philosophy, and to social science.

You may buy The Nurturing of Time Future at Amazon, Barnes & Noble and major bookshops.

eBooks can be purchased from Smashwords, Amazon, Apple or other online bookstores.

I have tried in these pages to build “we” by encouraging practical cooperation; I affirm a larger “we” still under construction in the cheerful traditions of Bloch’s Principle of Hope; and also of Paul’s principles of faith, hope, and love, while in my own way agreeing with Nietzsche that Paul is Platonism for the masses. I know I am an odd bloke who has arrived at his odd opinions through odd personal experiences. But on my main points I am unable to imagine how I could possibly be wrong—which of course might be a weakness in my powers of imagination more than as an objectively existing impossibility. Still, although all truth be in principle tentative, and although it be pretentious to claim to have a message other people need to hear, I do not see how I could be mistaken when I say that Vicente and millions of women and men in situations like his will be marginal to society and at risk of becoming violent, or mentally ill, or drunkards, or dealers in drugs or pimps or worse, as long as employment depends on sales.

I feel that the young people of Cairo are counting on me to save them. Now they have overthrown their dictator; it is March of 2011; they want decent jobs at decent pay, peace, freedom, democracy. Unfortunately their dawn is dawning at twilight, when decent jobs are scarce all over the world, when social safety nets are unraveling even in the old democracies. Today they want a yesterday that is now vanishing in Europe. My fear that the same old untenable but dominant ideas that are unraveling the rest of the world will unravel Egypt is fed by seeing lines of unemployed men leaving Egypt to seek work elsewhere on Cable News Network and British Broadcasting Corporation television. Then come interviews with experts saying Egypt needs development to create jobs; calling for improving Egypt’s global competitiveness; declaring that political and economic stability require a secular state following international models, neutralizing the local radicals, hermetically sealing off the corridors of power to exclude the Muslim Brotherhood and other groups regarded as Islamist, tribal, socialist, radical and/or extremist, doubting that the Egyptian military will be able to perform the delicate balancing act needed to reassure the financial markets that Egypt’s new democracy will not become populism. The experts on television say politely but clearly, in discourses studded with euphemisms decorating but not disguising their meanings, that if appearances of people-power cannot reliably be alloyed with realities of money-power, then the military can be counted upon to impose on Egypt now as we speak dancing in the streets to celebrate the end of Hosni Mubarak’s thirty-year-long de facto government, yet another de facto government—which would be one, but only one, of the outcomes I feel the young people of Cairo are counting on me to save them from.